Posted on July 7, 2014 by The Appliance Doctorx

When Thermador called upon The Appliance Doctor for a sick oven on set of the Food Network’s “Beat Bobby Flay”, they pulled out all stops to set up a midnight triage at the Rock Shrimp Productions studios in Manhattan.

The Appliance Doctor was able to get Technical Trainer Richard Sedlack, MCAP CSM, into New York City on Father’s Day night to assess and resolve the issue.  “There was no time for handshakes or autographs” Richard explains, “With less than 8 hours until Monday’s taping, we were able to diagnose and replace the ‘7 Position Switch’ that was causing all the chaos on the set.  This key user interface device electronically controls temperature inside the main oven and is an essential component in a ‘healthy’ oven.”

The delicate repair took place backstage under scaffolding in the dimly lit area where the opposing chefs appearing on the show typically wait to meet their fate.

“We had power to test the oven at the least, but without gas, we had to calibrate statically”, says Richard. After checking in with “Rock Shrimp Productions” the next day, we were pleased to hear that they were able to get the units connected and continue with the filming of the show. Way to save the day Richard!

Chief of Staff, Anthony Attanasio is a huge fan of the Food Network and was delighted to contribute.  “Eating healthy has been a key focus to me in recent months, and I am a supporter of the culinary arts.  These young men and women work so hard on a daily basis to master their skills and it was an honor to be acknowledged and recommended by Thermador for our thorough and timely service.” 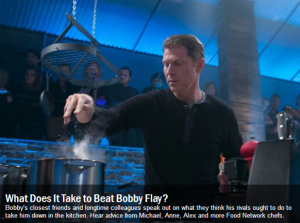