Repairman Anthony Attanasio tells clients when an appliance breaks down, don’t just rush out to buy a new one. A simple repair may do.But it isn’t always easy to know when to repair something. Consumer Reports National Research Center surveyed more than 27,000 subscribers who had repair problems, including appliances, to find out if you should repair or replace it.

“While most of the products we asked about don’t break too easily, when things do go wrong, they can go horribly wrong,” Anthony said.

Consumer Reports found with 3- to 4-year-old appliances, one of the most repair-prone is a side-by-side refrigerator with an icemaker. One in three had repairs.

Front-loading washing machines were also more likely than top-loaders to break down. One in four needed repairs.

And Consumer Reports finds you can’t go by brand alone, either. GE has made very reliable cooking appliances, but repair-prone are its refrigerators with icemakers. LG has made reliable plasma TVs and clothes dryers, but not side-by-side refrigerators.

“If you’re trying to safeguard against your appliances breaking down, an extended warranty may sound like a good solution. But in our experiences, they have generally not been worth it,” Consumer Reports’ Dan Diclerico said

That depends on the product and how old it is. But here’s a rule of thumb: If the repair will cost more than half the price of a new product, it’s time to replace it.

The Appliance Doctor has had fifteen minutes of fame! (Well, technically it was a second over two minutes, but who’s counting?) 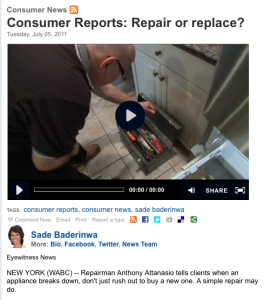 Anthony Attanasio, the head appliance doctor appeared as an expert news source on Eyewitness News for Channel 7 in a Consumer Reports special feature on home appliance repairs this past month. In the video and article that Channel 7 features him in, he offers insight and advice on how to know when the right time is to repair and when the right time is to replace your home appliance.

While Anthony is by no means unfamiliar with being on film (see Appliance Doctor TV), his appearance on Chanel 7 is especially exciting as it is one of the largest news channel in his local area of NYC, Westchester and the Bronx.

Also exciting is the fact that Consumer Reports sought out Anthony because of his expertise on the subject of home appliance repair. Consumer reports is an organization that publishes newsletters and digital content for consumers. Their mission is act as a reliable and unbiased resource offering advice and research about a variety of products.

Anthony has been in business since 1980 and has been handling appliance repairs in NYC, Westchester and the Bronx ever since. In the video he talks about an appliance repair he performed that saved his client over $1600.

“When an appliance breaks down, don’t just rush out to buy a new one. A simple appliance repair may do,” Anthony says in his video interview.

The video interview also covers what some of the most reliable appliances and brands are, and the ones that are most prone to repair. Consumer Reports found with 3- to 4-year-old appliances, one of the most repair-prone is a side-by-side refrigerator with an ice maker. One in three had repairs. When looking at brands, Consumer Reports found that GE stoves or other GE cooking appliances are very reliable, but GE refrigerators with ice makers are prone to repair. LG clothes dryers were reliable, but again LG refrigerators needed repair.