Posted on September 8, 2013 by The Appliance Doctorx

After seeing A Bronx Tale (which is one of my favorite movies) starring Chazz Palminteri (one of my favorites actors), I finally had the opportunity to meet Mr. Palminteri. We met this past June at The Capital Theater in Port Chester, NY after his one man performance.

Well known for A Bronx Tale, Palminteri originally wrote the script for the stage and performed it as a one-man show in Los Angeles. It became the hottest property in Hollywood since Rocky. Mr Palminteri was offered over a million dollars to walk away from the project and with $200.00 left in his bank account he refused. He wanted to play Sonny and write the screenplay. One night Robert DiNiro walked in to see the show and as they say “the rest is history.” Palminteri then moved the play to New York , where it played for four sold-out months and earned him nominations for the New York Outer Critics Circle for both acting and writing. While in New York he completed the screenplay of A Bronx Tale and soon found himself starring opposite Robert DiNiro.

Born in 1952, Palminteri grew up in a tough area of the Bronx and it gave young Calogero (Palminteri’s given first name) the life lessons that would later prove very useful to his career. His real father was a bus driver named Lorenzo. The Bronx Tale is a story about his life. 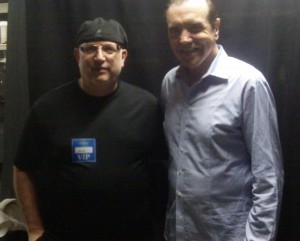 The Appliance Doctor with Chazz Palminteri